Social media feeds are often flooded with impossible bodies: hourglass figures, visible ads and toned thighs. But if you have enough fat for a round bum — and you’re smashing your deadlifts — visible abs may not be a realistic possibility. Likewise, it’s likely you won’t have enough fat for that Kim K. bum if you have a six-pack. In the words of Taylor Swift – “It’s all just f***ing impossible”.

There’s been a general movement towards body positivity, inclusion and realistic body standards in the fitness industry in recent years — clothing sizes are becoming less restrictive and models reflect ordinary people more and more — but sometimes it feels like representation of body types on social media is going in the other direction.

Jenny Garza is one person trying to buck this trend. Like many women, Jenny has been on a journey with her body, her relationship with it and her self-confidence. She’s open and honest about the challenges she’s faced — and she uses them to motivate other women to train for their health, for the mental and physical benefits, to learn to love their bodies no matter their shape or size.

I spoke with Jenny to hear her story, how she transformed her relationship with her body for the better, and what advice she has for other women who want to achieve the same. 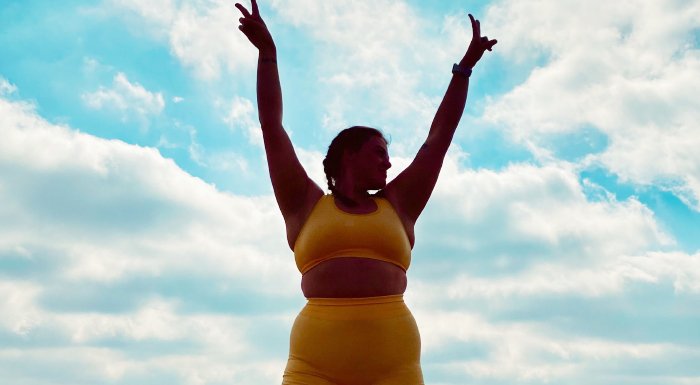 Jenny, 30, is from Middletown, Indiana, a small town in the American midwest. She spends most days working out in the gym and updating her Instagram with killer workouts, empowering other women to exercise without inhibition.

But Jenny’s relationship with her own body hasn’t always been so strong. It’s taken her years to achieve this level of self-confidence — — both in and out of the gym.

Although Jenny has always been funny and had an outgoing personality, she struggled with her body image growing up.

“I’ve always been bigger, and I can remember, multiple times in my childhood, like my teenage years and stuff like that, where my body was the topic of discussion for every single person in my life.

“Growing up, I did not have a good relationship with my body, I would definitely talk down to myself, I would wear really baggy clothes, not be very confident and who I was, I would say that I’m more self-confident, because I think I’m really funny and I like my personality.”

Jenny’s difficult relationship with her body continued early adulthood. Some years ago, Jenny was diagnosed with polycystic ovary syndrome (PCOS), a common, but sometimes debilitating, disorder thought to affect one in 10 women in the UK. The diagnosis damaged Jenny’s perception of her own body even further.

“Probably up until I was like 25/26, I didn’t really appreciate my body and the stuff that it did for me. With having PCOS and dealing kind of with what that looks like growing up, you get this type of resentment towards your body because you see other people doing things and you’re like, ‘why doesn’t this work?’

“It saved my life”

But more challenges were to come. Soon after Jenny made this breakthrough, she went through one of the most difficult periods in her life. She had a miscarriage in 2019, which left her feeling more detached from her body than ever before.

To repair the emotional damage and reconnect with her body, Jenny made fitness her goal. But for the first time, physical transformation wasn’t her priority. “I got into fitness in 2019. I had a miscarriage. And it was just really a really hard time in my life.

“After my miscarriage, I had this like disconnect with my body. And I decided I really want to be fit, I don’t want to lose weight, I don’t want to be a certain size, like I want to be fit. And that’s something that I was like really passionate about, because I’ve always been on a weight loss journey. And those definitely don’t work all the time. So, my mission was to be fit. And I just started working out slowly and learning more in the gym. And I just am so glad that I did because it saved my life.”

Since starting her fitness journey, Jenny has found that some symptoms of her PCOS are more manageable — having children is a possibility once more — and her confidence has grown immeasurably.

“Since starting, I’ve lost 85 pounds and I have had a lot of my symptoms from PCOS kind of lessen, which has been great because I’m 30 and this is something that I’ve struggled with since I was 18.

“And for the first time my doctors and I see a huge difference in my numbers. And that’s very exciting because PCOS has a lot of infertility issues. And that is something that I would like, to grow family, and it’s something that’s harder to do when you have PCOS. So, that’s exciting to be able to be more confident in my body, but also be more confident as I move forward in my body and what my body can do for me.”

Jenny has tried many types of exercise in the past, but it’s weight training that she has found to be the most transformative for her mental and physical wellbeing.

“I think this is probably my third or fourth weight loss or fitness journey. And this is the first time that I’ve ever implemented strength training into my routine. I would say that women finding the confidence to go into the gym and lift weights is life changing. Because we’re taught, ‘oh, you shouldn’t lift weights, because it’s gonna make you bulky’, or other things about the gym that aren’t true.”

The confidence Jenny has built inside the gym has been translated into her wider life, too.

“The confidence that I get when I feel strong, when I hit a PB, or I go up to the bench and can warm up with whatever the person before me left, that makes me feel confident, I feel like that has a really big impact on you. Because you don’t believe that you can lift this type of weight and then when you do, you feel strong, and you feel powerful. That gives us the confidence to believe in ourselves, to continue and push forward.”

“You’re tripping over me wearing a sports bra?”

Confidence in the gym can take time. No one walks in for the first time knowing exactly what all the equipment is, or what it does. And this feeling of intimidation is often more intense for larger bodied people.

Jenny initially felt this way, but over time she gained confidence and a sense of belonging.

“There’s always an area that’s like a secluded area and a corner. And for first six months, I legit just worked out in that corner. And if someone was there, when I got to the gym, I would be like, ‘I have to go work out somewhere else’.

“But then slowly after six months, I started to gain confidence in myself, and then was like, ‘OK, well I’m gonna go out to like the weight room’ or ‘I’m gonna use the dumbbells out there’ and slowly started go out into the actual gym and use it.”

“I just thought, I’ll just start with a crop top and I’ll go from there and see how that makes me feel. But honestly, once I started wearing a sports bra working out, I was like, ‘oh, I really don’t care anymore. Let’s just do that all the time’.

“But it took me about a year to feel confident in myself, not even just confident in the gym, but confident in myself. And I’m from a small town in Indiana. So, very conservative. And I always get judgment passed on me because I wear a sports bra. But even with dealing with that, it still makes me feel more confident because I know that I’m believing in myself enough that I don’t care what other people think about what I wear.

“Like you’re really tripping over me wearing a sports bra in the gym? A sports bra that’s designed to be in the gym? But I mean it takes time. I wouldn’t say that it’s easy.”

“You cannot look at someone and be like, ‘they’re healthy’, or ‘they’re unhealthy’”

Jenny has found an incredibly supportive group in her 28,000 Instagram followers. But social media can also be a hostile place, and Jenny has had to deal with plenty of trolls. Her preference is to meet negativity with positivity, and her motto of “kill em’ with kindness” never fails.

“I am a very polite type of person. But you’re also not going to come on my platform and spew hate. And a lot of the times, it’s people just saying ‘Oh, because you’re bigger, and you’re working out, you’re promoting obesity’, which is like the most is literally the stupidest thing I’ve ever heard in my life.”

As horrible as it is, this belief that larger bodied people promote obesity, simply by exercising or even existing, is a common one, especially online. It’s harmful, regressive, and — as Jenny suggests — completely illogical.

“It’s probably the most common comeback you get as a larger person existing in the gym. They’re gonna be like ‘you’re promoting obesity’, which is really wild, because that’s actually the opposite of what we’re doing. Just because you’re bigger and taking up space and being in the gym.

“You can’t look at someone and be like, they’re healthy, or they’re unhealthy. So for someone to just be like, just because you’re larger and showing up and doing your thing, ‘you’re promoting obesity’, is just dumb.

“I’m promoting people to love their body as they are to get moving and to drink their water, to eat healthy. I am promoting a healthy lifestyle. But just because I’m bigger doesn’t make it irrelevant.”

Jenny’s energy is infectious. Even though she’s been through some seriously tough challenges in life, through fitness she has found a way to have a healthier relationship with her body, and has learned to love herself again as a result.

Head over to Jenny’s Instagram for workout tips, honest advice and tips for maintaining self-confidence.

Want more from our ambassadors?

Be An Ally And Break The Bias

"If you're not educating the people that need to be educated, we're not going to get very far."

"It's how your body can perform, not what it looks like"