The Zone » Nutrition » Be An Ally And Break The Bias

There’s no reason empowering and celebrating the achievements of women should be confined to a single date on the calendar. But International women’s day is certainly the day to pay this endeavour specific focus as we join efforts to #BreakTheBias.

Many men consider themselves to be natural supporters of gender equality, but given they can’t live the experience directly, ignorance of the challenges women face daily remains persistent. A key factor is communication, opening fair dialogue to everyone’s benefit. To be an ally, everyone can improve their awareness to better notice situations, and speak or act when they do. It’s about being on the same page, not divided.

No more domination of the weights area. No more staring or disregarding personal space. No more being made to feel uncomfortable. It’s the gym. Every person who attends has the right to feel welcome and safe.

We caught up with some of our most inspiring female ambassadors to find out what being an ally means to them, and how it can be achieved. 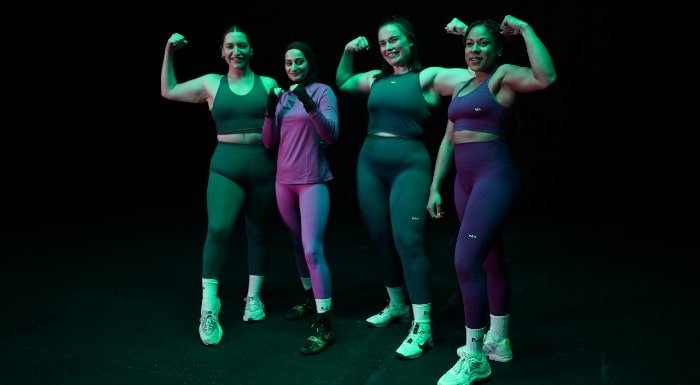 Having set up a female-only gym to create a safe space for women in the fitness industry, Farah recognises allyship goes further than just the fitness industry, it needs to be present everywhere. Support is vital in the workplace, in nightclubs and relationships. Although, she doesn’t ask for much — allyship in her eyes is simple.

“It would just be someone who is supportive. Someone who’s very supportive on what women want to do.”

As World’s Strongest Woman winner, Farah knows she’s capable to fight her own battles if she were to ever find herself in a challenging situation, although this doesn’t mean she wouldn’t appreciate help if it came to it.

“Harassment would be something I’d be able to sort out myself, if it was like, someone who literally wouldn’t leave your personal space, then perhaps I’d want help.”

Being an ally means something different to all women, so communication is the best way to ensure your allies know what you need from them. If in doubt, speak.

“I do think that women should be able to help men, because it might be something that they don’t understand… Because how one woman perceives help is how another woman doesn’t… Communicate how you’d like to be supported.”

Ella is a keen gym goer. Like most women, she has experienced negative comments, and the feeling she doesn’t belong in certain areas of the gym. This is one of the reasons why male allyship is so important. It’s important women know they have the support of the men around them to know they’re welcome in fitness spaces.

“In terms of actually being an ally, it’s realising that derogatory comments and terms aren’t OK to use as a joke…. If you’re in the gym, being a bit more aware that women probably will feel more uncomfortable because it is a male- dominated environment and just making sure you’re not accidentally staring at them and making more of an effort to make sure the woman feels comfortable. If she’s in a space, give her that space.”

But what does being an ally mean to Ella? Treating everyone with respect, irrespective of their gender.

“Focusing on a person’s individuality and not on their gender. And keeping your mouth shut if you’ve got nothing nice to say.”

“Treat women in the same way that you treat your male friends. Treat everybody the same.”

It’s not all down to men. Women have a vital role in education. No one can be expected to be perfect without clear communication.

“Trying to educate your friends that are guys, telling them and explaining what they should do to make sure they avoid doing anything that could be taken the wrong way — that’s the best way to educate people, by explaining.”

Nicole is a 21-year-old student and powerlifter. Co-existence in male-dominated environments is second-nature. She doesn’t let it stop her from owning her space, and she surrounds herself with allies.

“An ally to me is someone who isn’t afraid to stand up for other people. Someone who doesn’t sit on the sidelines, if they see other people struggling, they care for others.”

Sophie is a lifestyle and fitness influencer who uses her page to chat with, inspire and motivate her followers. We spoke with her about the reasons why she didn’t always feel at home in the gym, among them her gastric sleeve surgery and weight loss journey. But she eventually summoned the confidence to break into the weight section.

“Men owe it to the females in their life, like their mums, their sisters, daughters, nieces, to turn around and fight any form of sexism or any form of gender inequality they see or hear.”

And on the prospect of women helping men to become allies, Sophie’s all for it.

“I think women can help men become allies. I think it’s about women calling out their male friends when they hear of something discriminatory… But I don’t think it’s solely the responsibility of women at all. I think as much as you can educate people.”

Being an ally really is one of the simplest and effective means of empowering women in intimidating spaces, like the gym. Understanding women’s needs, being aware of troubling behaviour and speaking up when needed. Like many things, communication and respect is key.

She couldn't love it more!

Fitness Clothing Gifts For Him & Her | Our…