Farah Fonseca is no stranger to the gym. She began strongwoman training at 21, and hasn’t looked back since. Now 28, she’s won Britain’s Strongest Woman three times, World’s Strongest Woman once and has recently opened a female-only gym.

After years of dreaming and hard graft, Farah finally opened the gym in Basingstoke, where she lives, in February 2022, having wanted to create a safe space where she lives for women to meet and train for some time. Female wellness is in the building’s foundations, and community and empowerment is ingrained in the space.

“It’s how your body can perform, not what it looks like.”

As a strongwoman, Farah uses her body for its strength and embraces it, choosing not to prioritise aesthetics at the cost of function. She doesn’t work to make herself look a certain way, she works to build strength, and promotes this mindset to others. It’s a particularly important message, given the influence images on social media can have on women.

“Just an empowered and supportive environment. That’s the key. We run things like mum and daughter classes, we run classes for 11-16-year olds, which are very much based around strength and empowerment, trying to teach young girls how to utilise their bodies. Some girls do just have strong legs. It’s like, don’t be scared of using them… Rather than thinking, ‘I wish I looked like my friend who’s really skinny’.”

She’s learned to ignore body standard expectations that are rife in the industry. And she’s working this mentality into the foundations of her gym.

“When you turn up and you’re on a massive stage, no one cares what you look like, it’s literally who can lift the most amount of weight? So, I think doing it for so many years, I’m very lucky that it’s literally just been ingrained into me. It’s how your body can perform, not what it looks like.” 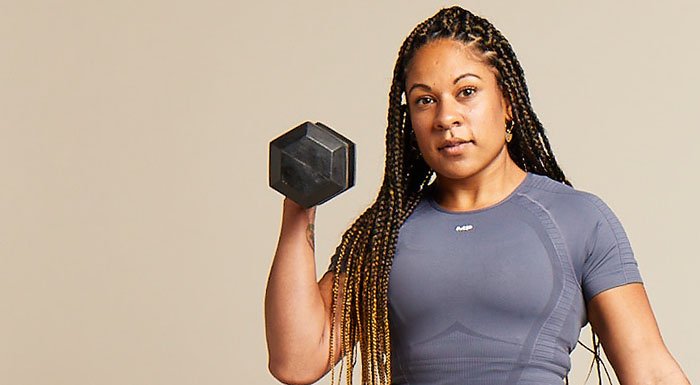 Education is one of the main purposes of Farah’s gym. It’s easy for women to focus on their goals and forget about what their bodies and minds really need, to disregard their mental health and prioritise looking a certain way above everything else. Farah is a qualified PT, nutritionist, and an eating disorder practitioner, and sessions at the gym cover all sorts of topics. There’s something to help everyone.

“Women aren’t always that well educated in how their bodies work, not only from a physical standpoint, but also how to help their own mental health… And it’s trying to really teach or trying to educate women as much as possible. So that’s always the forefront of our gym: education first.”

“Are you then saying that all other gyms are not safe for women to train in?”

Farah has faced a certain degree of scrutiny for opening a female only gym, with some people suggesting it’s sexist and divisive.

“Are you then saying that all other gyms are not safe for women to train in? It’s not even about that. It’s not the issue of being a safe space, it’s the fact that you’ve got young girls who would be between 11 to 16, who might want to talk about their periods, who might want to talk about anything regarding their body, and they might not feel comfortable doing that in a male environment… Women just go through different things to men; it’s just creating that environment that they can feel comfortable in.”

Farah has spotted a gap in the market for an educational environment. An environment that focuses support on a community of women otherwise overlooked — not just to help them reach their goals, but to develop in an environment where they are comfortable.

Farah doesn’t plan to stop at one gym, though. She has nationwide expansion is in her sights, and a future of female-only gyms is on the cards. But there’s a few things to get straight first — the most important factor for Farah is building a far-reaching community without sacrificing its values.

“I want to be able to get multiple sites without losing the culture. The most important thing to me is the community. It’s the empowerment, it’s the supportiveness.”

Empowerment, support and education. Those are words we can get behind to help foster a positive environment for women in the fitness industry and beyond. And an environment that helps to foster body confidence, positivity, freedom to talk openly, and all-round good vibes is the perfect place to start for so many women.

She couldn't love it more!

Be An Ally And Break The Bias

"If you're not educating the people that need to be educated, we're not going to get very far."

How To Bulk On A Budget

How Creatine Is Made | In The Lab