Vegan pre-workout foods backed by research, so you can make the right choice.

There’s tonnes of information out there on getting the right vegan pre-workout foods, and it can sometimes be overwhelming. But in reality, it’s pretty simple! Focus on food groups that you can choose from to ensure your body is getting the right fuel to optimise its performance.

Here’s a list of scientifically backed vegan pre-workout foods that you can choose from to increase your exercise endurance and push your workouts to the limits. 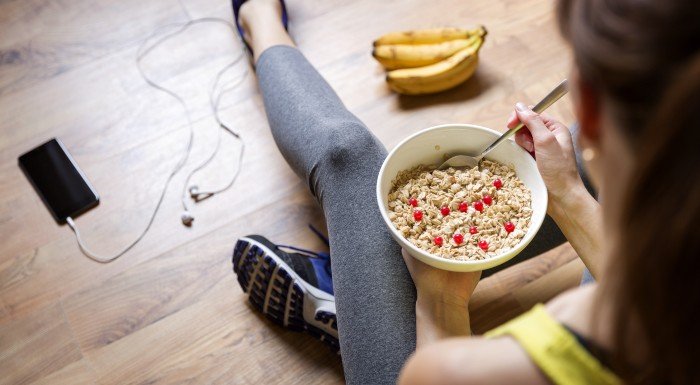 If you’re looking to improve or maintain your exercise performance, scientists generally recommend eating a high-carbohydrate meal 1-4 hours before exercise.

Carbs are known to be the main energy-providing nutrient and are metabolised by the body most easily during exercise – providing the energy you need during a workout or exercise session where your fast-twitch muscle fibres are relied upon1.

Since it’s important to consume pre-workout carbohydrates, eating foods that contain both protein and low-GI carbs is a great way to maximise your performance and results.

As we mentioned in the previous point, pre- and post-workout protein has been shown to optimise muscle growth and repair. If you’re following a keto diet, tracking macros, or you’ve already had your carbs in another meal or snack, you may want to choose a lower-carb protein source before your workout – making our vegan pre workout protein shake the perfect option.

If you’re getting your carbs elsewhere and you’re looking to boost your protein before your workout, try these low-carbohydrate protein sources:

Beetroot and beetroot powder as a sports supplement has gained attention recently as a food that can enhance exercise performance.

Beetroot contains a high level of nitrates, which increases blood flow to muscles – enhancing their efficiency during exercise3. Add beetroot powder or beetroot juice to your vegan pre-workout shake around 60 minutes before exercise for best results.

Starches come from carbohydrates like maize and barley, while modified starches are made by hydrothermally or chemically modifying the starch to decrease the rate at which they’re digested.

As well as providing carbohydrate for energy, pre-workout consumption of modified starches like Waxy Maize Starch has been shown to increase the body’s ability to use fat instead of glucose for energy4, preserving carbohydrate stores and therefore increasing exercise endurance.

Maltodextrin and dextrose are other great options to add to your vegan pre-workout shake to make sure your body has quick-acting carbs to avoid wearing down your glycogen stores.

Caffeine is renowned for improving exercise performance – enhancing a range of endurance-based tasks like running, cycling, swimming and rowing, plus increasing reps performed during resistance training4.

Caffeine is known to enhance exercise performance by increasing utilisation of free fatty acids and reducing the breakdown of glycogen (carbohydrate energy stores), as well as making adaptations in the central nervous system.

You can find caffeine in these plant-based drinks and supplements:

Creatine Monohydrate (or just ‘creatine’) is a chemical compound that’s made naturally by our bodies to supply muscles with energy. During exercise, the body’s demand for creatine increases and stores need to be replenished for optimum exercise performance.

Creatine has been scientifically proven to improve physical performance during bursts of short-term exercise (like weight training or sprinting), as well as increasing muscle size5.

You can find creatine naturally in meat and fish, but there aren’t any significant plant-based sources, therefore taking a creatine supplement is the best way for vegans to get creatine into their diet.

Research recommends that you take 4-10g of creatine per day, and you can spread this out between your vegan pre- and post-workout shakes.

Where it’s generally recommended that you opt for lower-GI carbohydrates before exercise (although there are some conflicting results), intra-workout (during your workout) high-GI carbohydrates have been shown to be best for endurance exercise6.

Common carbohydrates with a medium to high glycaemic index include:

If you can’t stomach eating food during exercise, carbohydrate supplements like maltodextrin, dextrose, and carbohydrate energy gels are perfect, plus they’re designed to be digested quickly for optimum performance.

A word on eating fat before your workout: Researchers have recently explored eating fatty foods before exercise, but this hasn’t proved useful. The results have shown that although eating a fatty meal raises the amount of fat in the blood, the body still uses carbohydrates as fuel on the whole, and exercise performance isn’t enhanced.

Want to hear more about training on a vegan diet? Check out this Truth About episode…

When it comes to fuelling your workouts, there are many vegan pre-workout foods that you can use to prep properly. Whether it’s a meal, snack, or vegan shake, you can become just as powerful with a plant-based vegan diet as others who use animal-based foods.

Get your day off to the best start with these plant-powered recipes.

Go on, you deserve it.

You might be surprised by one of the ingredients…

5 Exercises To Target Your Shoulders, Triceps &…

Target More Than One Muscle With Compound Movements…

BCAA for Women | What are BCAAs & Should You Take Them?