Turmeric is a popular spice that is often used in curries and other savoury dishes. Used in many Asian cultures and known as “the spice of life” or “the golden spice”, it has become popular worldwide. Turmeric benefits us in lots of ways, and the early research into this golden wonder is promising, so this article will dive into everything we know about turmeric.

As well as giving curry its yellowish colour, turmeric also has powerful plant-based compounds called curcuminoids. Curcumin is the active ingredient in turmeric that is popular in research for its potential medicinal uses. However, curcumin makes up only about 3% of turmeric by weight, so you will likely need a supplement to reap the health benefits.1 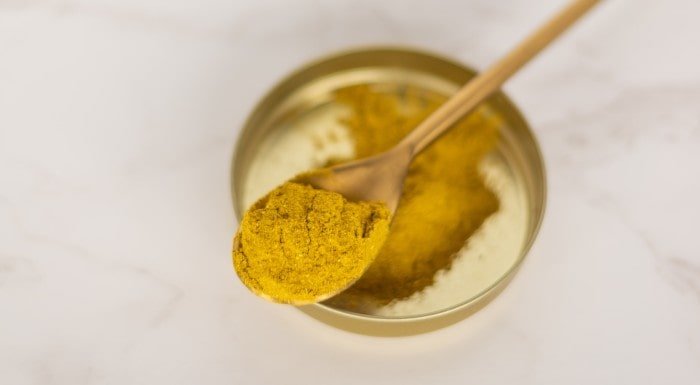 What are the Health Benefits of Turmeric?

Turmeric is a natural anti-inflammatory and antioxidant, which leads to all of the research surrounding its potential health benefits. While many of these areas of research are ongoing, it has been clear that the chances of toxicity (or negative effects) of adding turmeric are very low.2 Some of the turmeric benefits that researchers have found are…

1. Turmeric may help with pain from arthritis

Research has shown improvement in knee pain from osteoarthritis after regular supplementation of curcuminoids.2 One study even compared curcuminoid supplements to typical NSAIDs (non-steroidal anti-inflammatory drugs) and found that they could be just as effective in treating stiffness and pain while walking.2 This is a promising for turmeric as long-term use of NSAIDs can have negative side effects.

While studies into turmeric improving health outcomes for those with diabetes and obesity have not been conclusive, one study did show improved blood glucose control in pre-diabetic subjects, which could play a role in prevention.2

This is a popular area of research and while there has not been a lot of clinical evidence, having turmeric in the diet has the potential to improve blood sugar related health concerns.

While many chronic diseases are related to inflammation, the specific impact of turmeric has not been proven. It has been used for many years as a medicinal herb in certain cultures.

However, the bioactive phytochemicals (plant compounds) in turmeric make it an easy choice to include to help prevent the damage that inflammation can do to your body.

4. Turmeric is a proven antioxidant

The curcuminoid compounds of turmeric are chemically proven to have antioxidant properties.3 Antioxidants are key in preventing free radical damage that plays a role in aging and causes many diseases.

Turmeric has also developed a bit of a reputation as a superfood, which can only mean good things. Learn more about superfoods here.

Some studies have focused on cholesterol and triglyceride levels and their response to curcumin supplementation. While the research in this area is still ongoing, cardiovascular disease is a major concern for many who may benefit from adding turmeric to their diet.4

There have been studies focused on curcumin supplementation for those with depression and anxiety related disorders. While some studies saw improvements, they were only done over short periods of time and more research needs to be done to support this potential benefit,5 but early research is promising..

Turmeric is clearly a powerful spice with many potential health benefits. While there is no general guidance on exactly how much turmeric you should take to reap the benefits, you could consider the amounts used in research studies as guidance.

While turmeric and its curcuminoid compounds have many promising health benefits, the studies are limited and recommended dosages vary. However, the golden spice (turmeric) has been shown to have many antioxidant and anti-inflammatory effects – showing again how powerful a healthy diet with plant-based nutrition can be to prevent disease and preserve your health.

It's one of the longest standing supplements for a reason.

Do I Need To Ditch Alcohol To Lose Weight?

Don't throw your beer away just yet...

Bulking Diet: An Introduction To A Hardgainer Diet

Get over a gaining slump with these tips and tricks for the hardgainer diet.

Creatine Loading Or Cycling? And How Much Per Day?

What Is Hypertrophy Training?