There has been some debate in the past about whether Superman actually eats anything, but looking at some of the latest Superman films, we have to assume he’s getting his protein in. And with all of that flying around, you’d think he’d need the calories, right?

Well, looking back at some of Superman’s archive of adventures, we found some pretty questionable “meals”. So, to celebrate the launch of our brand-new collab with the man himself, let’s dive into what one of the most iconic superheroes has eaten in his time saving the world. 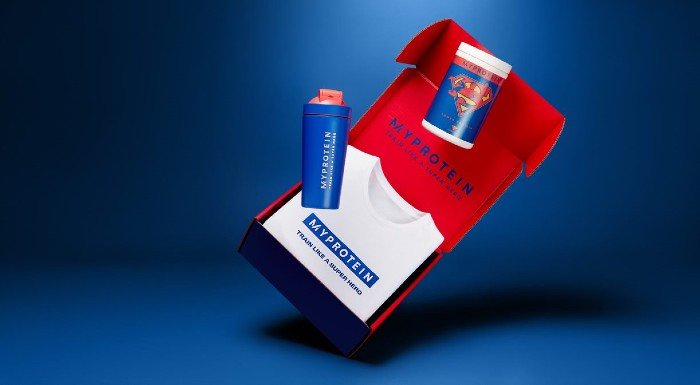 Probably one of the most relatable of Superman’s hunger pangs is his run-in with hamburgers.

Back in the 70s Action Comics released issue number 454, “Superman’s Energy Crisis”. In this issue, Superman gets so exhausted from saving the world that he urgently needs to stock up on calories. So much so that his only option is to eat one million hamburgers. Yep, one million.

If we took the macros in an average hamburger (from a well-known fast-food establishment…) and multiplied them by one million, that comes out to a hell of a lot of, well, everything.

Back in the ‘60s when Superman was a mere Superboy, Adventure Comics released issue number 310, in which Superboy swaps bodies with his dog Krypto for the day, so naturally, Superboy chows down on some dog biscuits. But how much could these dog biscuits have helped Superboy grow into Superman? Well, turns out it’s pretty hard to tell because the macros of dog food typically aren’t given the same way ours are.

But what we can say, after quite a bit of dog food research, is that many dog biscuits tend to be around 12% protein, 5% fat and anywhere from 12-20 calories per biscuit.

So, they don’t sound incredibly effective for Superman style gains.

In issue number 266 of Action Comics, Superman drinks a love potion that sends all of his powers wild. As a result of this, Superman ends up wolfing down an entire “royal banquet”.

With “a royal banquet” being a little bit vague, we decided to use the macros of another well-known chicken shop’s ‘boneless banquet’ as a guide for what Superman may have consumed.

So, if Superman did consume a banquet similar to this one, he’d have had (spoiler alert: it’s not ideal if Superman was on a cut).

This one might be even weirder than the dog biscuits?

In a 1974 comic, as an effort to get rid of his fingerprints on a salt shaker, Superman decides to just eat the whole thing, normal solution, right?

You can probably guess the macros of a salt shaker (minus the metal), but here they are anyway.

Of course, fat, protein, carbs and fibre come out at zero in 100g of table salt, along with a lot of sodium and a little bit of calcium and iron. Although there are much better ways of getting these two micronutrients than downing 100g of table salt.

Whilst we can all agree that Superman has a pretty impressive physique, he’s definitely missed the mark on his nutrition a few times, especially back in his early days. Lucky for him we’ve now made him his very own Clear Whey in the thirst-quenching flavour of Acerola Cherry. So, don’t follow Superman’s example in this article, fuel with his Clear Whey and train like a superhero.

What Is Whey Protein? | Benefits, Side Effects & Dosage

Myprotein Discover The BEST Workout Track Based On…

Fasted Cardio: What Is It & What Are The Benefits?