27-year-old Liam from Newcastle has a hereditary eye condition called retinitis pigmentosa — a condition that causes you to lose your sight. With the help of his guide dog and the gym, he’s found a new passion and purpose. 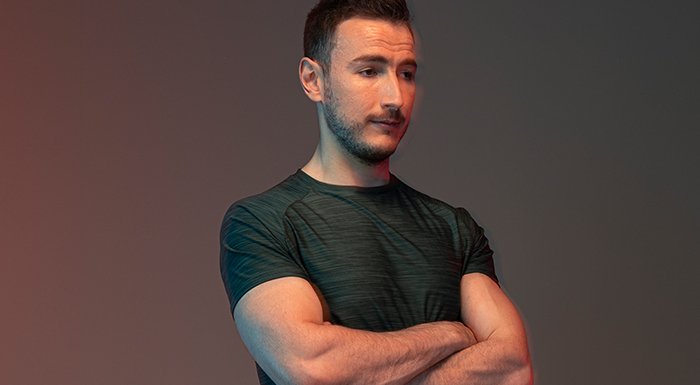 My sight deteriorated quite quickly, so when I was younger I didn’t use a stick or anything and I used to be able to play football.

During my last year of university was when I really started to struggle and I had to use my stick and put myself on the waiting list for a guide dog.

I finished uni, but I still had about a year waiting for a guide dog and in that year I did nothing.

I couldn’t really leave the house and I didn’t really have much confidence in myself at all.

When I got my first guide dog, I was just looking for things to do and someone suggested going to the gym, so I gave it a go. I found it quite intimidating at first because I didn’t know what I was doing and I was trying to do it by myself.

At first, at the gym they weren’t really willing to let me in by myself and basically strong-armed me into getting a PT. I did this for a little while, but I just couldn’t afford it.

I went and found a gym that I could be in by myself. I just got a bit more confident knowing that people are going to help you and no one’s going to be angry at you.

The majority of people want to see you do well and they want to help you.

I ended up going back to the gym that wouldn’t let me go there originally. They had a new manager and they were really disgusted that I hadn’t been allowed in.

I started going there instead and then I started to make new friends and that’s also the gym I ended up working at as well.

The more I got into it, the more I was getting more confident in myself.

My mind set was just completely changing as well — I wasn’t feeling as down about myself as much and I was feeling more confident just by meeting other people — people who have now become proper friends as well as just people that you see at the gym.

I was trying to find something that I thought I was going to be able to do as obviously looking for jobs is hard at the best of times.

People in the gym would say that I was teaching them things that they weren’t doing themselves.

The managers at the gym convinced me that I should give PT training a go. I just took it from there and thought that I’ve got nothing to lose.

Learning new things has always been a bit harder. I probably spend longer just looking for weights and putting plates onto bars than I actually do training.

My sessions are probably twice as long just because I’m looking for things.

The hardest thing is trying not to lose motivation and thinking that I can’t be bothered anymore.

I also try to plan my sessions around peak times because if I go then, I’m not going to have a chance. With clients, I make them do it all anyway. I can send them to look for weights and stuff.

People take for granted just how easy it is to find what you’re looking for in the gym.

I feel like I’ve not pushed myself as much as I could have done that day because I just couldn’t go and find something. It’s getting about too, like if people have left weights on the floor — I don’t know how I’ve not injured myself more just in between sets.

I’d like to be able to help people overcome injuries and things like that. People who are in daily pain, I think there’s more of an opportunity to help in that regard.

Also, it was hard selling myself as a blind PT when you’re competing with so many other PTs who can see and can get things done quicker.

For my own training, I’m doing a push/pull lower split at the minute over six days and I do a lot of compound stuff.

One of the things I struggle with is that my sense of balance is quite off, so I spent quite a lot of time thinking that I should be squatting and I’ve got to the point now where I’ve said no.

The hardest thing in my journey has been learning to cook. I found it really, really difficult.

To be able to cook and have an interest in it, you need to be able to see what you’re doing. My meals are pretty much anything that I can just quickly shove in an oven and take out, like chicken and sweet potato — it’s just the same bland thing every day.

I live with my parents still who help me out. They were really encouraging and I probably would have given up if they hadn’t given me the encouragement that they did.

My advice to new gym-goers would be to be patient — don’t expect the world really quickly.

People who start going with their friends will feel like because their friends are doing a really heavy weight, that they’ve got to be doing that and not learning the basics.

By pushing themselves far beyond what they’re capable of doing, they’re going to get injured and that kills their love for it.

I always found that people are worried about other people watching them and I totally understand why they feel self-conscious.

When I first started going, I knew that I was going to stick out with the guide dog, obviously.

I knew people were going to be watching and so I didn’t want to make a fool of myself. Now I just get on with it. My guide dog’s called Harley, he’s very popular and I do worry that I’m distracting people from their workouts sometimes!

Want more? Check out the rest of our inspirational customer stories here.

Gym Closed? How To Still See Progress With The Help…

Phosphatidylserine And Cortisol | Benefits And Dosage

What Is The Cabbage Soup Diet? | Is it Good For Weight Loss?