Like most dedicated bodybuilders, New York-native Alex Tilinca embarks on the ritual of bicep curls and bench-presses week after week. Loaded up on protein, he documents his progress on Instagram, where he shares the secrets to how he sculpts his incredible physique with his 30,000 followers.

But unlike most other bodybuilders today, 21-year-old Alex has faced challenges that go beyond what’s usually faced in the gym. Being a trans man, Alex’s journey into the competitive bodybuilding space has come with difficulties. But he’s made it on to the competitive stage and managed to garner a community of trans athletes and allies keen to learn from him and follow his journey.

Now, Alex is giving other trans men everything he’s learned on his journey up to now so that they can avoid the mistakes he made and get on to the path to success straight away. This is why he’s started his own company, Self Made, which provides trans men an eight-week intensive bodybuilding training course tailored specifically to their needs. On the course, Alex coaches his clients on everything from understanding macros, digestion, supplements, navigating hormones, and competing as a trans man.

But don’t just take our word for it — here’s what Alex had to say about his programme and his own story, from transitioning at 11 –years old to becoming a bodybuilder taking the competitive stage by storm. 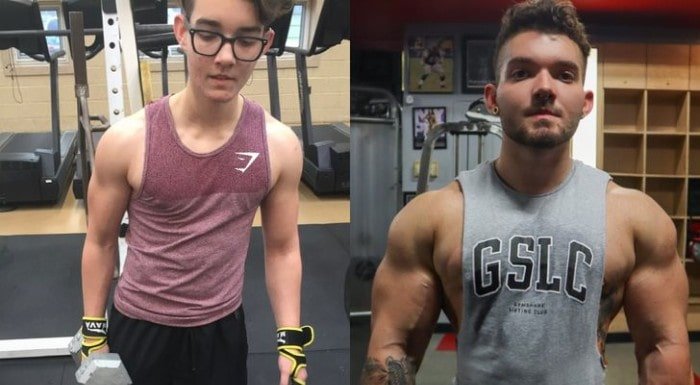 ‘There are really no resources for a transman specifically’

Alex is paving the way for trans-athletes by creating an intensive bodybuilding course tailored specifically to trans men. There are some key differences for trans bodybuilders that cis people don’t need to consider — all of this is taken into account in Alex’s course. He wants to provide trans men the opportunity to sculpt their bodies and kickstart their own bodybuilding journey, which is something he never had.

“There’s so much information out there for cis men in the gym — what to do, how to eat. But there’s really no resources for a transman specifically.

“I’m pretty much providing a platform and an educational resource for trans men to join me. We meet once a week and I pretty much run them through the course and the ropes of how to body-build. I pretty much allow them to skip all the years that I’ve made oopsies and just kind of get to what to do with their own bodybuilding journey.”

‘I was turned down by a lot of coaches’

It was Alex’s own experience at the start of his training that helped him identify a gap in the market for trans-specific personal training.

“In my own personal experience, I was turned down by a lot of coaches because I was trans, whether it be on a personal level, or they just didn’t feel comfortable working with me or didn’t have the knowledge base to work on me.”

Now, with Self Made, Alex hopes to help bridge that gap by providing that knowledge.

“I want to provide as much resource as I possibly can for the trans community, knowing that they’re probably going to have to go through the same thing that I did.”

‘You have to look at yourself as an athlete’

It’s natural that many trans people may have reservations entering the gym for fear of feeling unwelcome, so Alex’s goal is to get them to switch their mindset and understand that they belong as much as anyone else.

“I always tell my clients and tell anyone that talks to me that you can’t let being trans stop you. You can’t flinch if you’re in the gym and you’re looking at a weight, you can’t think I’m trans, I don’t know if I can do that. You have to look at yourself as an athlete.

“I feel like there is this sense of not belonging as a trans guy going to the gym and I think it’s really important that trans individuals understand that they definitely have a place in the gym, it’s something they can definitely pursue if they want, they’re more than capable physically and mentally.

“I think considering some laws and regulations it’s drilled into you that you are physically inferior to your counterparts which is so not true. I have absolutely no problem keeping up.”

Though Alex may have had difficulty finding a PT to coach him properly at first, he’s had a wholly positive experience within the bodybuilding community.

“Believe it or not, I’ve had very minimal backlash for what I do and who I am. The more people find out about me, the more they reach out to me.

“I have a very interesting story and it’s definitely different to your typical upcoming bodybuilder story.

“I think even though they can’t really understand the trans experience, they do understand the idea of wanting to change their body for the better. I think we can all stand on that same idea and respect each other for that.”

Naturally, many trans men and women may be wary of even entering the gym, let alone seeking a career in professional bodybuilding. But Alex’s experience proves that things are changing, and he is at the forefront of that change.

When he told the management and coaches at his own gym, he received an incredibly encouraging response.

“I went to them and told them, and they’d already known me for quite a bit. I was just very honest. I said: ‘I’m trans, I’m looking to compete, is that an issue, am I wasting my time, is there a way we can make it happen?’ and they really didn’t even flinch.

‘You have to be your own hero’

The best piece of advice Alex would give to his younger self is to have confidence in his own abilities. Back yourself, find your focus and the rest will come.

“If you know your why, you will figure out your how. And things will happen for a reason. Sometimes you might not realise it in the moment, but you have to trust that as long as you’re doing your best every day, you are moving in the right direction.”

Alex is one athlete certainly paving the way for trans bodybuilders. He’s helping take out some of that fear around the gym that naturally comes to many trans people, showing them they’re just as capable of making bodybuilding history as anyone else.

A Pioneer Of The LGBTQ+ Fitness Industry

Could Happiness Boost Your Immune System?

Self Myofascial Release | Explanation, Technique and…