Keto, Mediterranean, Atkins, low carb, carnivore … I don’t think I’ve got the brain capacity for any more diets. But I’ll make room for one more because nutritionist and PhD researcher Richie Kirwan is here to introduce us to yet another: the whole food plant-based (WFPB) diet.

In this instalment of Nutritionist Explains, Richie tells us what the diet is, its benefits and how it differs from other similar diets, particularly the vegan diet.

Veganism isn’t just about food. It’s a philosophy and a way of living that avoids all animal cruelty and exploitation for any human purpose. In other words, veganism is more than a diet.

Vegans avoid anything that comes from animals, including honey from bees, leather products, and any cosmetic goods that have been tested on animals. Veganism involves a strict diet that excludes many foods and has very little to do with nutrition.

The WFPB diet, on the other hand, is completely focused on food and naturally has much more to do with nutrition. Unlike veganism, it has no set definition. There are a few general guidelines, making it more of a dietary pattern. Richie says this is a good thing because it’s more of a flexible guide you can follow rather than rigid rules you must abide by. If, like Richie, you have no time for rules, then the WFPB diet might just be perfect for you.

More about the WFPB diet

The diet’s guidelines focus on whole, unprocessed plant-based foods like fruit, veg, nuts, seeds, whole grains and legumes. These food groups make up most of the diet. In Richie’s words, “food on this diet should look like you could find it in a field”.

Quality of food is another major focus of the diet. It’s recommended you eat unprocessed or minimally processed foods with very few ingredients, so grains ground into flour or nuts turned into nut butter are staples.

There’s also a focus on local, seasonal and organic produce — although organic is by no means a requirement.

What are the benefits?

The average diet in the UK or the US is poor. A study showed that almost 60% of calories eaten in the US come from ultra-processed foods. These are foods made from highly processed ingredients, including flour, sugar and refined fats and oils. People in the US eat a lot of foods that are low in nutrients, high in calories and not very filling.

Richie says almost any diet is going to be better than the standard American diet, but diets outside the US aren’t much better either. Ultra-processed foods make up 50% of diets in many other countries, including the UK. And that’s just an average figure, meaning there are many people who eat more than this.

The WFPB diet encourages people to eat plenty of foods with beneficial nutrients, like fibre, phytonutrients, vitamins and minerals — these are all associated with better health and lower risk of chronic disease.

A vegan diet focuses on eliminating animal products, so you could have a diet full of processed foods like biscuits and fizzy drinks, and it would still be completely vegan. Obviously, this wouldn’t be the healthiest way to live.

Basically, vegan does not equal healthy, contrary to what you might believe.

An issue with typical WFPB diets is they don’t include many animal products, if any, so they may run into the same problems as some vegan diets: deficiencies in minerals and vitamins such as B12, calcium, iron and zinc. This is a risk of any diet that cuts out entire food groups, so planning is required to avoid missing key nutrients. 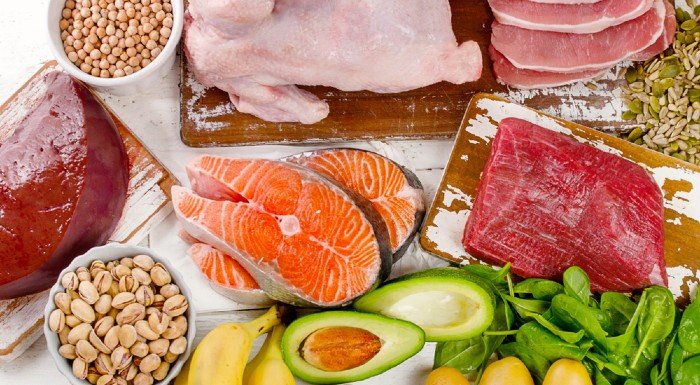 Does plant-based mean no animal products?

Richie thinks no, but it’s down to personal preference. As we said earlier, the WFPB diet is a guideline, so it’s up to you how to interpret them. For Richie, he chooses to eat animal products because he likes them and they’re nutritionally dense.

All these foods can be consumed if whole foods and plants make up most of the diet, but choosing to include or exclude animal products is entirely up to you.

As usual, Richie is not recommending you do anything you don’t want to do. After all, a diet will not work if you’re not invested in it. It sounds like Richie’s a big fan of the WFPB diet, mainly because of its flexibility and inclusivity. Plenty of fruits, veg, beans, seeds, whole grains, and a few optional animal products. Sounds like a winner to me.

Best Health & Fitness Things To Have Happened In 2020

We’re Celebrating 16 Years Of Beautiful | This…

Beta-Alanine | How Does It Improve Performance?