The Zone » Training » How to do the Goblet Squat | Technique, Form and Common Mistakes

The goblet squat is one of the three most common squat variations using dumbbells. Read on for a detailed focus on the goblet squat, including how to perform technique correctly, as well as a description of common exercise mistakes and how to avoid them.

Home workouts: It can be performed easily at home and added to your home workouts, because the goblet squat doesn’t require a lot of space or equipment.

Stability: Often when performing exercises such as the barbell back squat, there can be poor balance or a fear of falling forwards. The goblet squat can feel like a more stable exercise, and it is also easy to bail out if you miss a rep.

Upper back strength: As you need to maintain an upright posture, your upper back muscles are put to work to maintain optimal positions. This makes the goblet squat not just a leg exercise, but an effective way to train your core and upper body too.

How To Perform The Goblet Squat 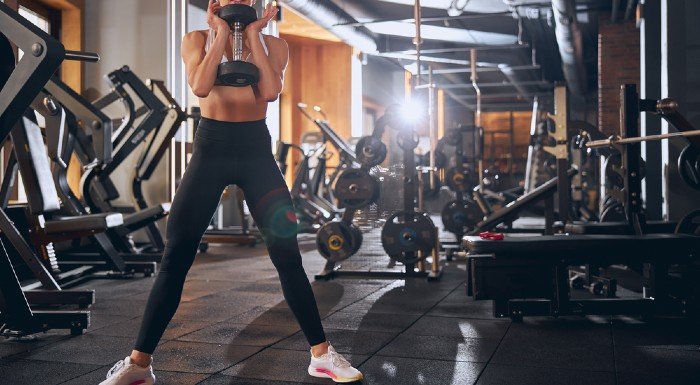 When performing the goblet squat, ensure that your feet are firmly placed on the floor while facing as straight forward as possible. Poor feet and knee positioning can lead to undue stress placed on the knee joints.

Your heels should also be placed flat on the floor. If you’re performing this exercise and rolling forwards towards your toes, then there is far less efficiency in the movement; the knees are once more placed under unnecessary stress and there is a far greater likelihood of injury.

When rising from the bottom position out of the squat, your hips should rise at the same rate as your shoulders and torso. Allowing your hips to shoot up can lead to you losing balance and dropping the weight, potentially causing injury.

Allowing your spine to round during a goblet squat is not inherently injurious. But it is more likely to result in injury and it is certainly less productive, as the target muscle groups are not being used properly. To fix this, lower the load used and take your time to focus on the proper technical execution of the lift. Effective lower back exercises include hyper-extensions, bridges and deadlifts as well as rehabilitation movements such as happy cat/sad cats, back extensions and knee rolls.

Due to poor mobility, limited range of motion is far too commonly seen in the gym today. Those who try to lift more than they physically can will often perform with poor form and lack of depth. This reduces the expected stimulation of the quadriceps, glutes, hamstring and quads, and neglects almost all of the previously mentioned benefits.

To prevent this, choose a weight that you can perform to a 90-degree parallel level or lower, focus on the time under tension and perform it correctly! Alternatively, try performing a box squat. This will teach you to go low enough without the fear of falling to the ground, as the box is there to stabilise the movement and protect you.

Holding the weight too far away

This causes you to lose balance and can lead to you missing a rep by dropping the weight, or you will be forced to grind out the rep in suboptimal positions, potentially leading to injury. The fix for this is simple — just keep the weight close to your chest throughout the movement!

Try the dumbbell goblet squat for a squat variation that’s beginner friendly and can be performed with very little equipment. The exercise is still highly effective at activating the quads and glutes, so make sure to add it to your sessions!

Scott developed a passion for sport and performance through competing in long‐distance running and bouldering prior to attending university. Scott’s academic achievements include a BSc honours degree in Sports Therapy and an MSc degree in Strength and Conditioning. He is also a member of The Society of Sports Therapists and CIMSPA. Previously, he has worked with amateur and elite athletes, ranging from university sports teams to elite rugby league athletes and Team GB rowers. He currently works with various gyms in developing and delivering training programmes for amateur athletes and gym‐goers. While passive treatments remain in his arsenal as a Sports Therapist, Scott uses his skills to promote physical activity for combatting obesity, lower back pain and other sporting injuries, and simultaneously providing programmes for athletic development. Being a recent graduate, Scott strives to gain experience wherever possible, offering advice and sharing knowledge along the way. He believes it is important to practice what you preach, so in his spare time, Scott practices Olympic Weightlifting and enjoys being active outdoors in all weathers, although he still believes it is important to make ample time for social activities.

How To Preserve Your Gym Gains Using Your Diet

Refuel Your Ambition | Which Training &…