5-HTP (5-hydroxytryptophan) is an amino acid that is naturally produced in the body. It is a precursor to serotonin, which is a chemical that sends signals between your nerve cells. The list of processes in the body that serotonin contributes to is extensive, and it is required by many of the body’s major organs.

In the brain, serotonin is involved in regulation of behavioural processes including mood, appetite, reward, anger, stress response, fear and memory. Serotonin is also key in many central nervous system processes, such as the sleep-wake cycle, motor control, respiratory drive and body temperature.1 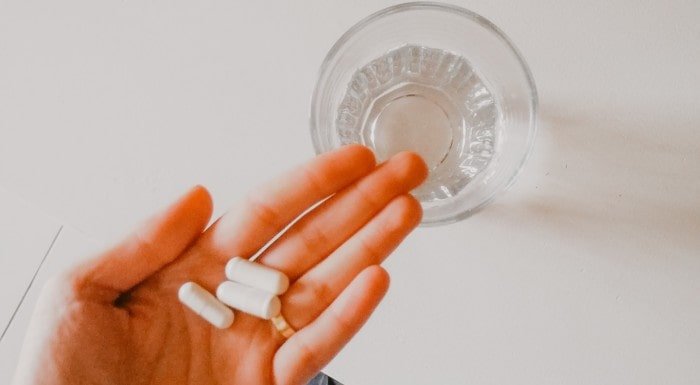 To produce serotonin, the amino acid L-trytophan is converted into 5-HTP, which is then converted into serotonin (5-HT). Supplementing 5-HTP bypasses this initial conversion of L-tryptophan to 5-HTP, and evidence suggests that 5-HTP effectively increases levels of serotonin in the brain.2 Due to the extensive biological processes that serotonin contributes to, increasing levels of serotonin has been associated with a wide range of health benefits, including improved mood, sleep and appetite regulation.1

May help with sleep

Serotonin can be converted into melatonin, which is hormone that plays a central role in the sleep-wake cycle.3 Melatonin levels increase at night and fall in the morning, and studies have shown that this may affect jet lag and improve sleep latency, or how long it takes you to fall asleep.3 As 5-HTP increases serotonin and therefore melatonin production, there have been studies to investigate whether 5-HTP supplementation has an impact on sleep.

While most of these studies so far have focused on animals, a recent study among older adults showed that 12 weeks of 5-HTP supplementation improved sleep quality.4 Specifically, the time taken to fall asleep was reduced. Another study showed that supplementing 200mg of 5-HTP increased REM (rapid eye movement) sleep, which is the type of sleep important for memory and learning.6

Multiple studies have investigated also whether 5-HTP supplementation can help increase satiety, or fullness. This can last several hours and may reduce energy intake in the following meal and throughout the day. If energy intake is reduced, this increases the chances of calorie deficit, which is required for weight loss. So if 5-HTP supplementation does help increase fullness, it may be useful for weight loss.

However, studies so far are inconclusive. Following a review of the evidence, the European Food Safety Authority concluded that no cause-and-effect relationship could be established between 5-HTP supplementation and increased satiety leading to weight loss.8

Looking for more info on how 5-HTP actually works? Read this article next…

Side Effects of 5-HTP

In all the time 5-HTP has been used as a dietary supplement, no evidence has been found to suggest there are unsafe doses to consume.9 However, excessive serotonin levels can be dangerous, with symptoms ranging in severity, from diarrhoea and headaches to muscle rigidity, fever and seizures.10 It is therefore recommended you consult a doctor before taking 5-HTP.

5-HTP can be taken as supplement, with studies showing it is an effective way to increase levels of serotonin. Although it is possible to increase levels of the amino acid L-tryptophan (which is converted into 5-HTP and then serotonin), it is also used in other biological processes and not all of it is converted into 5-HTP. Dietary sources of L-tryptophan include dairy and poultry such as chicken and turkey.

When testing the effectiveness of 5-HTP, researchers have used a wide range of doses depending on what biological function is being investigated. In studies testing satiety and weight loss, doses have ranged from 300mg11 to 900mg12, and in studies looking at sleep, ranges between 200 and 600mg have been used.

5-HTP supplementation can help increase levels of serotonin. This may have numerous health benefits, including improved mood, sleep and appetite regulation. But it’s important to consult with your doctor before supplementing 5-HTP — as it’s a precursor to serotonin, excessive levels of it may be dangerous and lead to unwanted side effects.

What is Leucine? | Leucine Benefits, Dosage and Sources

The supplement to power up muscle building.

Should I Use Creatine Whilst Cutting Fat?

Spoiler: Yes, and it can actually help your cut.

How to Keep Your Core Strong During Lockdown